Pulling a baby in a bike trailer 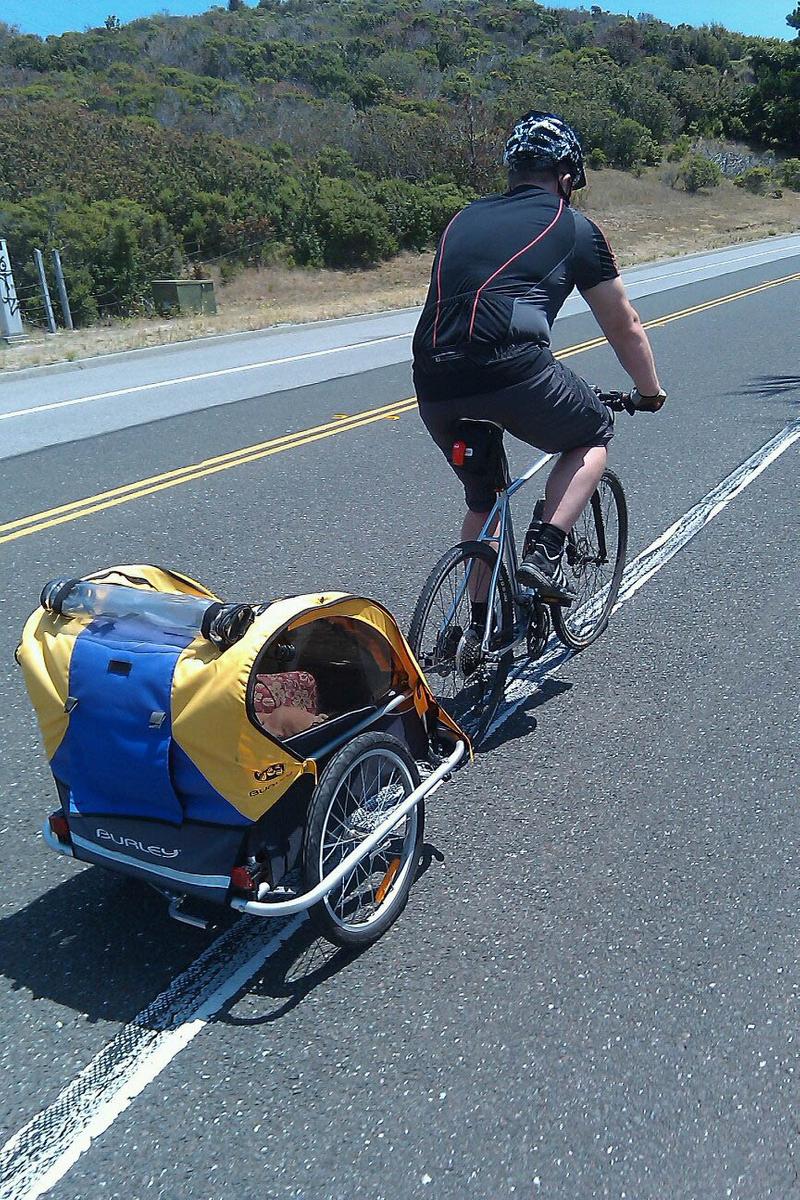 So today was our first time taking Jacqueline out for a bike ride. She loved it! If by loving it, I mean, she pretty much slept through the whole thing.

A little back story, Jacqueline is coming up on 10 months old here in the next week and a half. She had a doctors appointment last week and the doc said it was okay to start pulling her behind the bike in a trailer if she’s strong enough to sit herself up. So we took the opportunity today to do just that.

We loaded up the bikes and trailer, and headed over to Bicycle Sundays on Cañada Road in San Mateo County. Basically on most Sundays they shut down a 2.5 mile stretch of the road south of highway 92, for biking. It is a nice smooth surface, and a safe place to ride, there are tons of folks out there.

Being the first time I’d towed anything behind a bike, I didn’t really know what to expect. I did spend the morning make sure all the attachments were sound, and ready for the ride. I then took about 35 pounds of weight and put it in the trailer and rode around the neighborhood. All seemed to go well, so I was comfortable putting the baby in there, with her helmet of course.

The first thing I noticed, pulling a trailer is pretty straight forward, the only thing I really noticed was the extra weight, and the rattles. The rattles I will take care of though with some strategically placed tape (probably hockey tape as I have some around). The rattling was primarily occurring on the trailer where the safety pins go in to hold things together, a little tape I think will keep them in place and reduce the rattling noises. It didn’t appear to bother the baby at all, but it sure annoyed me!

As for the weight, it felt like I was towing a parachute around behind me, especially when going into the wind. Speaking of wind, we had the mesh screen down, but not the plastic window, the wind didn’t seem to bother the baby one bit.

We rode about 10 miles today, it sure seemed like one of the hardest workouts I’ve had on the bike yet, I am sure that is due to the baby, but also due to the fact that around the house in Half Moon Bay we pretty much ride on flat ground, where Cañada road had some elevation changes to it.

What are your tips for towing a child behind your bike?

« My first impression of MapMyRide What are your Reasons2Ride? »
comments powered by Disqus