My foray into (clipless) clipped pedals 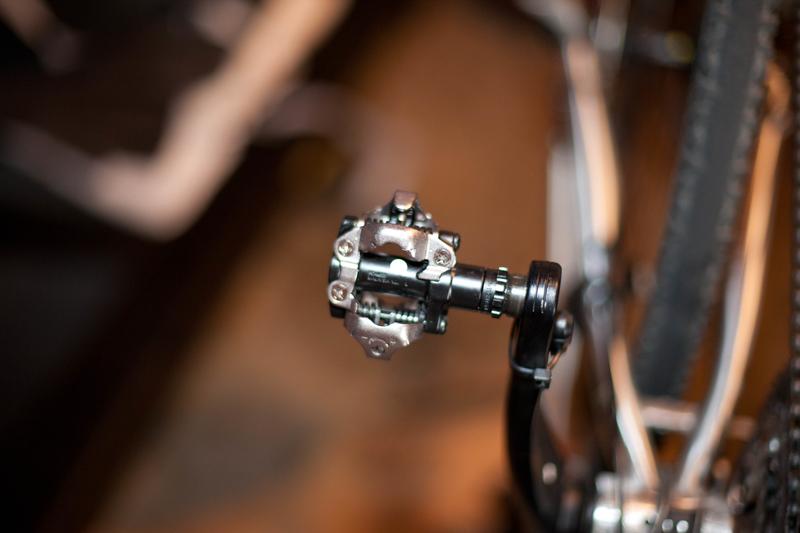 First things first, I had no idea why they are called clipless pedals, and I still doubt the reasoning I read. I am actually going to call them CLIP pedals, because that is what they really are. More on that later.

So, I went to a pedal other than a standard platform, and boy am I glad I did! A couple of weeks ago I ordered a pair of shoes with the intention of getting some pedals to go along with them, Friday the pedals arrived. Saturday the wife and I (and baby) went to the pumpkin festival here in Half Moon Bay, taking the baby and trailer for the two mile drive to avoid sitting in traffic for which likely would have taken 30+ minutes. I didn’t want to try the new pedals for this trip, so I waited until Sunday to install the pedals.

from Amazon on Thursday with my free 2 day shipping via Amazon prime, they showed up early, score. Here are a few shots of the pedals installed on the bike, and my shoe hanging there as I played around with things.

Installation of the pedals was easy, everyone says you need to use a pedal wrench, but I managed just fine with a 17mm Craftsmen wrench from my toolbox, just as I did when I travelled with the bike a few weeks ago and boxed it up for the airplane.

Once I installed the pedals fully loosened the clips on the pedals so that exit from the clips would be very easy, I have had plenty of people tell me that clipped pedals will be a new experience and I will likely fall. I figured having things as loose as possible would help to minimize that risk.

I tested the process out a bit, without actually wearing the shoe. I made sure I understand how the shoe went in, and how it came out of the clips. Going in is fairly straight forward, and as I began riding it became very easy to do. Put the front in first, then push down. Getting out of the clipped pedals was just about as simple, just turn your foot left or right and you’ll come free.

I immediately put my shoes on and started riding around in a circle in our front yard (grassy) to test things out and see if I could manage to get in and out without trouble, all was well. From there I got changed, put on my bicycle shorts (sans underwear) and headed out for a ride. I took off down Highway 1 early afternoon on Sunday, traffic was a bit busy from folks trying to get out of town after the pumpkin festival, that actually made for easy riding, the cars weren’t moving as fast as usual down one. Leaving the neighborhood I came to my first stop sign, in and out of the pedals without any issue.

After heading about 6 miles up 1 I turned off at the Moss Beach Distillery and decided to head up into the trails around Pillar Point, climbing a fairly steep asphalt incline, and then lots of dirt, all without trouble in the pedals.

So why would anyone want to use clipped pedals on a bicycle? Holy cow! They make a huge difference. The best thing I heard before using them was "instead of just pushing, your legs now push and pull" until I heard that I couldn’t figure out why people used them. That makes a huge difference, instead of your legs just pushing down on the pedals, they can now pull up.

Sitting at a stop light or stop sign, I typically take one foot out of its clip, leaving the other in place. With the that foot clipped in, I can easily reposition the pedal for prime launch, rather than having to stick my toe under the pedal and try to flip it backwards into the right location. But that isn’t the only pulling, and to be honest, that is really just a convenience.

The real benefit comes into play when you are really getting into a ride, you get both legs working, not just on the downward stroke as with a standard pedal, but now going the complete revolution you can work the legs. I definitely felt that difference when I was riding, and I am still feeling it today, but it is a good sore! I look forward to riding again later this week so I can feel it again.

So, back to the "clipless" thing. Well apparently "clipless" pedals refer to the fact that these types of pedals don’t contain a strap or basket for your foot to go into. They do "clip" in place on the pedals, so I say screw it, I’m going to call them clipped pedals, I think you should to.

Have you tried clipped pedals yet? Do you ride without them?

« Do you wear underwear with bicycle shorts? Riding with a GoPro and losing your Garmin Forerunner 305 »
comments powered by Disqus