Biking at night, prep for the trip


So today is the Fourth of July, and what is everyone going to be doing tonight? Going to watch Fireworks of course. The wife and I are as well, though we are leaving the baby at home with her Nana for the evening. Here in Half Moon Bay, CA there are fireworks scheduled over in El Granada, which is about a 3 mile bike ride for us.

So, with the goal of trying to avoid some of the traffic chaos that I can imagine will consume Highway 1 tonight, we are going to try to bike to a location where we can see the fireworks. We’ll head out early, when the sun is still up, and try to get a spot on the beach somewhere, but coming home we need to be prepared for the darkness.

I went to REI today after my autocross race (read about that over on Project350z.com) to look for a couple of things. First, I wanted to get a good setup so we could lock our bikes if we ended up having to put them somewhere while we watch the fireworks (I’ll be taking my camera/tripod so we may have to walk around a bit). Second I wanted to see what their options were for lighting for the bikes. 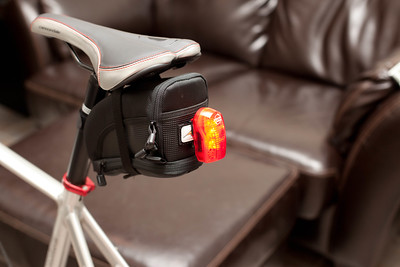 They had all sorts of options available, from cheap, to really expensive. I wasn’t too keen on the idea of spending a couple hundred dollars EACH BIKE for a light, so I just purchased two rear red LEDs (Planet Bike Superflash Rear Bike Light

) that either light up, or flash depending on the button press. I then had a brainstorm to try something with some flashlights that we each got for Xmas. They are some very bright white LED lights, and have a strobe option as well. I figured I could come up with a way to mount them on the front of the bike fairly easily. 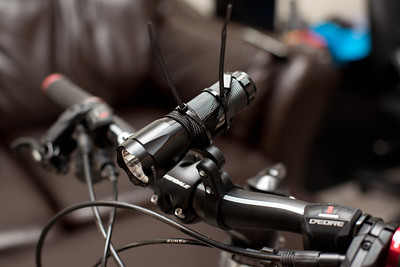 I got home this evening and started looking at how I was going to mount them. First I was going to try to use some of the mounts from the rear LED that I didn’t need because of the way we are mounting the rear lights to our bags. That didn’t quite work out the way I intended, but while trying it out I realized I could use the front reflector to mount the light. I ended up removing the front reflector completely from my bike, and then using the mounting bracket for it, along with two black zip ties, to attach the flashlight to the bike. I’ll have to take this out for a ride tomorrow and make sure it will stay attached, I would hate to lose the flashlight and go dark while riding! Before we head out I will trim the zip ties, I just left them for fitting purposes for now.

If you live in California, I believe (check for yourself) that it is law that you must have a white light on the front of your bike that is visible from 300 feet away. Though after I do a quick read of that page (linked) it looks like you may still need a light on your person, even if you have one on the bike? It actually reads like, if you have on on you, you don’t need one on the bike. Anyone have a take on that?

Always check your local laws before biking and be sure you know the rules!

« Getting a bike to ride, here’s our story Staying safe while riding your bike, be identifiable »
comments powered by Disqus