One day I’ll get better about these write-ups so that I make myself do them the day of the ride, or the day there after, when everything is fresh in my mind. That being said, the 2019 Tour Of Hermann Gravel Challenge was only 9 days ago, and it is still pretty fresh in my mind!

Hermann Missouri is just a little over an hour drive from my house here in Wildwood, and I’ve never been there before. The closest I’ve been was the 2017 Katy Trail ride in which we passed north of Hermann on the trail, we definitely saw signs for Hermann, but that was towards the end of Day 2 (112 miles that day) and I was not at all interested in taking an off trail detour.

The Tour Of Hermann Gravel Challenge was put on by the Alpine Shop, a store with a big local presence and great owners who support all sorts of outdoor activities. The event is a two day ride, typically with 3 “Loops” on Saturday, and 2 “Loops” on Sunday. This allows riders to be selective about the distance that they ride. I went into the weekend with the plan of riding 2 loops on Saturday (~66 miles) and 1 loop on Sunday (~50 miles). You can pick up your registration packet, T-Shirt, route maps, etc before the day of the ride, a buddy of mine from work went with me on Thursday before the ride and picked up our packets.

The weather leading into the weekend was sketchy, with lots of rain heading into the weekend. Flooding in Hermann caused the event HQ to change locations from the City Park to a local elementary school, overall this ended up working out great, there were no issues that I could see from the location change. When the event started the weather ended up being nearly perfect. It was a tad chilly,  but about 5 miles into the first loop everyone was stripping off their outer layers, including myself. Right before we left on the ride I tossed my wind cover into my backpack, and at the top of the first climb I stopped to take off my sleeves, really I stopped to rest, but the sleeves made for a good excuse. To get North out of Hermann you end up crossing over two rivers, and then head west on the Katy Trail. If you haven’t ridden the Katy before, check it out, and check out our writeup from 2017. 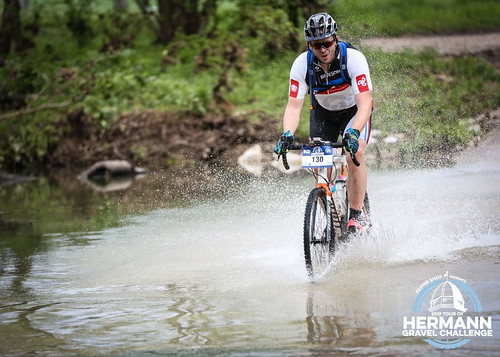 The first climb off the Katy was paved, but most of the rest of the first loop was beautiful gravel. I got to do my first (few?) water crossing, and got this great photo from Dan Singer of my reaction going across:

The first loop was just over 30 miles, wrapping back into Hermann back to the elementary school. This provides a good opportunity to stock back up on supplies, food and drink, and prep for the next loop of the day. At this point I should mention that I was riding with a car racing buddy of mine. We’ve both aged and started riding bikes, one of us still races cars, and the other rides his bike more. I’m old and slow on a bike, but watch out when I’m driving my car.

Chris and I had ridden together most of the first loop, but at the break in between I told him not to worry about waiting for me, feel free to head out and ride at your own pace. We started the second loop, first having to try to figure out which direction to go (initial turn wasn’t marked well) but once we got going we quickly figured out that we were in for a big climb. This time we were heading south of town, and climbing straight up on a paved road. I ended up being the slow man on the hill, taking my time climbing, and then getting harassed my some local kid in a white dodge pickup truck. He very kindly drove by, slowed next to me and yelled “You’re going to get killed”. I less than respectfully yelled “Thanks buddy”. He stopped in the middle of the road and yelled “What’d you say” and I responded “THANKS”. He then drove off. I have a little bit of a temper on the road, doesn’t matter if I’m on a bike or in a car unfortunately.

I didn’t get a good look at the truck, I wish I had, up the hill I saw a gray/white dodge parked in a lot, with a particular logo on the side of it. I knew the logo as a friend of mine works for the company, but the driver was nowhere to be found, so I couldn’t be sure that it was the same truck that stopped to harass me, otherwise I was going to vindictively reach out and try to cause that guy some personal pain. I’m sort of glad I didn’t see enough details, I finished my ride, I didn’t die, no need to try to get that guy fired…

The first loop Saturday had around 2,000 feet of climbing, the second loop had more than that, and was far more struggle than I had planned on it being. Here’s the elevation profile for Day 1’s first two loops.

By the time I had finished loop number 2 on Saturday, I knew there was no way I was going to attempt loop 3, and at that point I was pretty sure I was done for the weekend and would not be returning on Sunday. It was about 230pm when we finished the ride, after sitting around for a while chatting I decided it was time to pack up and head home. I had initially thought I would stick around Hermann for the evening and enjoy the included dinner/prizes, but by this point in the day I was ready to just head home. I managed to make it home around 5pm and unloaded the bike from the car. I washed it off and then decided I was going to take it easy and watch the Kentucky Derby from the comfort of my bed. I managed to make it right up until they got the horses in the gates, and then I passed out. I woke up 15 minutes later and had to quickly rewind to see the results of the race, after all the chaos of the disqualification I wasn’t ready to sleep anymore so I got up and headed down to the garage.

I decided at that point in time that I was going to make it back to Hermann on Sunday morning to do Loop 4 as I had originally planned, so I spent a bit of time getting the bike ready again. With the water crossing in the wash I needed to get the chain lubed up and make sure everything was in working order.

Sunday morning I got up early and headed in to Hermann, on the way there I distinctly remember thinking “I should have my radar detector in, I would be very pissed if I got a speeding ticket in one of these little small Missouri towns, and then I would never want to come back to whatever town it was”. Less than 5 minutes later I was pulling over in Washington MO getting a speeding ticket. My fault, thanks officer.

I was going to be by myself all day Sunday, my buddy Chris wasn’t able to make both days, and my buddy Chris from work had only planned on riding Saturday (which he bailed on due to family things). So I got setup early and ran into the Huebbe’s, another pair of old racing buddies. I knew I wasn’t going to be keeping up with them as I had checked out there Strava times from Saturday, so I just said hello and chatted a bit before heading to the start line for loop number 4.

Loop 4 started with 17 miles of Katy Trail, which honestly takes a lot out of you. I was in a line, sharing some of the work load, flying down at 15-17mph, by the time we reached the turn off of the Katy trail I had it in my head that I was simply going to turn around and ride the 17 miles back into town and call it a day. The Katy Trail is draining, it is packed lime stone, and simply gives you no ability to coast, you pedal or you stop,  it is fairly flat, no hills whatsoever, and becomes mind numbing when you ride it for a length of time, especially on Day 2 of a weekend. I sat down at the trailhead where we were to exit the Katy and resolved to finish the loop, no turning back now, I was going to ride whatever was ahead of me, I needed to, I need the training for Dirty Kanza.

The rest of Day 2 was fairly uneventful, some climbing, some descending, lots of gravel. The original Loop 4 was supposed to be right around 50 miles, but at the start of the ride they informed us that there would be a detour due to flooding on Highway 94, so we ended up cutting out about 5 miles of route, and fortunately for me, one big climb in the process. After loop number 4 I was ready for a quick soda, and then packed up my things so I could head back home to try to spend some time with the family for at least a few hours of the weekend!

With the Tour of Hermann Gravel challenge, you get a mason jar, and scoops of gravel for each of the loops that you complete. Because I had thought on Saturday afternoon that I was done, I grabbed my jar and my two scoops before heading home. I ended up leaving the jar at home, so I wasn’t able to get my third scoop of gravel for Day 2, but I was happy with my results nonetheless. The #TOHGRAVEL told me that I had a lot more training to do before Dirty Kanza. I was told by a previous DK rider that the Tour of Hermann was tougher than Dirty Kanza, and while I didn’t do the full TOH I sure hope that it was tougher than DK so that come June 1st I am more prepared than I think I am!