A few months late, but here it goes! Back in July, I headed out to Emporia again, this time with my buddy Wagner. We planned for a few weeks to hit up the Lunar Kanza, with the intention of 1) trying to secure a lotto bypass for Dirty Kanza 2020, and 2) having fun. In that order.

Lunar Kanza is a casual ride that they organize close to a full moon, that happens in evening/early part of the night, this time it was in July, about 6 weeks after DK. There was a 50 mile option, the maximum length, that is what we planned to complete. Part of the draw for LK is that it is a little more fun, a little more casual, and there are opportunities to get “tokens” out on the course, that you can trade in for prizes after the ride. The tokens are spread throughout the course in unknown locations. The prizes for the tokens vary, from small, cheap things, to large expensive things such as a Lauf Fork, or a bypass on the Dirty Kanza Lottery for 2020.

Wagner and I left St Louis at a decent time of morning on Saturday, planning for about a 4.5 hour drive, with a 6pm start time, we weren’t in a super rush to get there, and not in a super rush to get up and miss out on valuable sleep before we hit the road. We had booked a room at the Super 8 in Emporia, the same hotel that I stayed at for the DK in June.

We got into Emporia around 3pm and walked around town a little bit. For Lunar Kanza there is far less setup, only a couple of vendors, and way less people crowding out this small town. So we got a chance to walk around a see a bit more than I did a few weeks earlier. We got checked in at registration for the ride at the Gravel City location, and then wandered a bit. 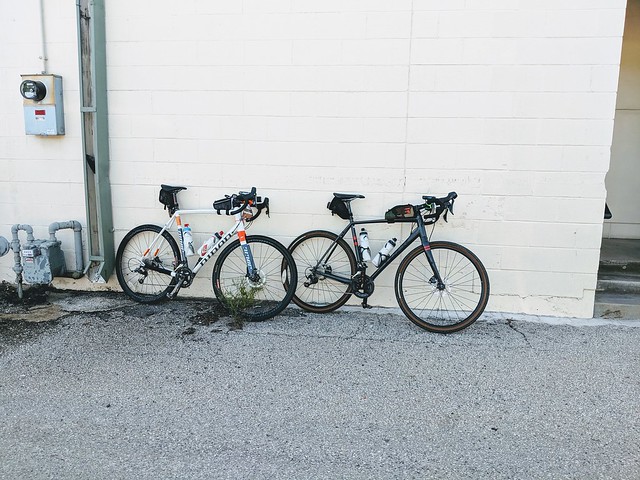 After checking out a few sites we headed to the hotel to get our things settled there before the start of the event. This was mid-July in the Midwest, so Emporia was a little warm that day, our hope was that it would cool off as the sun went down. By the time we made it back to where the event was starting, it definitely had not cooled off, but a crowd had started to gather. We parked in the same parking lot I parked in in June, with nice easy access to where we needed to be for the start of the ride. We prepped the bikes, prepped ourselves, and got everything in order for 50 miles of Kansas gravel. 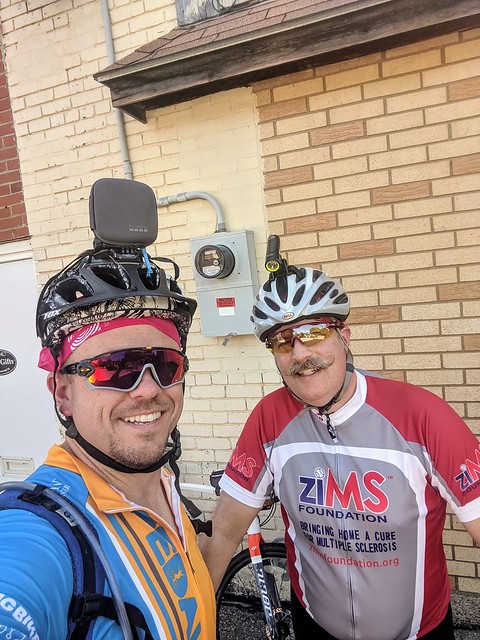 The start of the Lunar Kanza goes north on Mechanics street and followed the same route as the 2019 DK, at least for the first few miles. We ended up crossing over the freeway and turning down the same gravel road we did in June. It was at this point that we saw our first token. We were so wrapped up in the ride that we didn’t even realize what it was. Shortly after that was saw a couple on a tandem stopped, the lady was running back towards the token.

This was ultimately the ONLY token we saw while riding the whole day. We were towards the back of the group, and we believe that this ultimately caused us to simply not see any tokens on the road, because other people found them and picked them up. We did see two other riders getting tokens while we were riding, but we considered those tokens already gone as we weren’t able to have a chance at getting them.

The LK route went north, then west through Americus and out towards the reservoir. We figured/assumed, that this would be a rest stop, as it was at the half way point for the ride, but in the weeks leading up to the ride information became sketchy as to whether or not there would be a rest stop there. We wouldn’t know till we arrived, if there was or not.

Originally Wagner and I stayed together, but at some point we got separated. If I recall correctly, I got ahead of him for a bit of time, he ended up catching me, and then passing me as I slowly ran out of juice on the day. I decided I was going to take my time, these long gravel rides tend to be a lonely type of suffering ride, so he rode on ahead and we met back up at the rest stop. Kansas gravel really is beautiful, and I got to see some amazing sites while out there riding. At some point before we got separated the first time, we saw a guy go down in some rutted roads. We managed to avoid the carnage and keep going.

At one point on the ride there was a group of locals out partying in an above ground pool, they had some LK riders over and they were jumping in, full bike kits, for a cooling dip. I’m sure the water felt great, but I wasn’t about to stop and soak myself from head to toe. I did get a shot of the pool from my GoPro Fusion, it’s posted on Facebook.

At the rest stop I met up with Wagner again, and we refueled. The problem with the rest stop, it was at the bottom of Kahola Hill, so you had an opportunity to fill up on food, and then go out on the toughest climb of the ride. I paid for that, filling up on food was not a good idea. The hill hurt. Wagner got ahead of me and I was in for the lonely ride back to Americus. By this point the sun was starting to go down a bit, but it was far from dark.

As the sun was going down I was able to get some fairly cool shots, if i do say so myself, with my phone. Some days I wish I rode with my DSLR, but most days I don’t have any desire to carry that around. At one point you could see smoke on the horizon, and the closer you got the thicker/darker it got. Ended up being what looked to be a bunch of junk, maybe even an old trailer home, being burned. I’m not sure if the timing of this burn was meant to coincide with the Lunar Kanza, but the smell/smoke definitely wasn’t appreciated. Here are some of those photos: 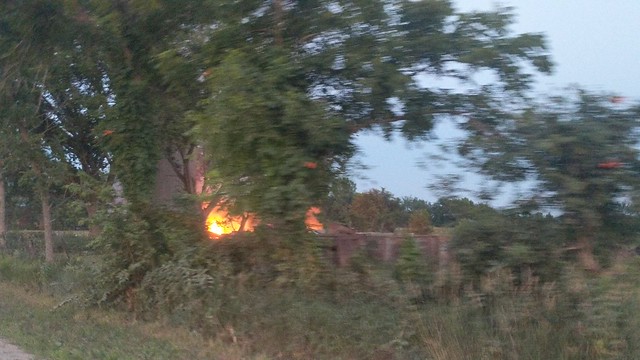 As the sun was going down I decided it was time to turn my lights on. By this point I was stopping to rest as I was feeling pretty tired. As I rolled into Americus I found Wagner at the rest stop waiting for me. I wanted to grab some water while there, and check the stop out. As I was doing so, I saw some of the volunteers filling up balloons, that had lights in them. I immediately thought that they were likely putting some tokens together, so I called Wagner over. I figured they were going to have multiple tokens, and we could each get one.

We then realized that they were tying the balloons together, and that there likely was going to only be one token available. I then spent the next ten minutes trying to look inconspicuous. Eventually I saw one of the ladies head around behind the restroom there at the stop, she tied the balloons to one of the bike racks way in the back that no one was using. I immediately went over and untied the balloons. She asked if I knew what to do, I said yeah, take them with me. She said to make sure that they all made it back to Emporia. The token was 4 or 5 balloons, with ribbons, tied to a plastic ring, and a white tag with a number on it. I came prepared, I had zip ties in my backpack, so I went over to the bike and started attaching the balloons to my backpack. The zip ties I brought came in super handy, along with the backpack, it was going to be fairly easy to get the balloons back! Here’s what my bike and backpack looked like as we headed out of Americus. 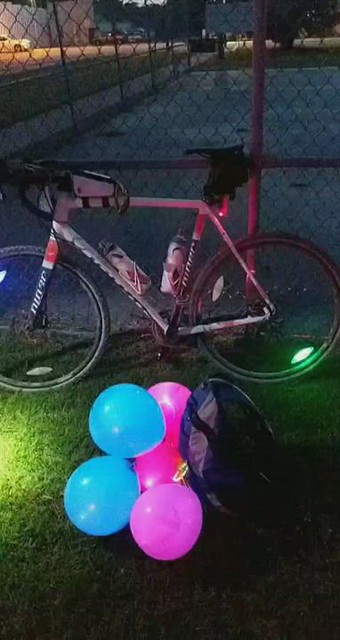 The ride the rest of the way was uneventful. It was definitely dark now, and the nightrider lights I had borrowed from Matt Struckman of 2TimingGuys.com, were excellent. I think I had a 1000 lumen light on the bike, and 750 on my head. Along with a nightrider tail light, and some colored lights off my kids bikes I was easy to spot on the road. Oh, and don’t forget the balloons!

We were on the lookout for the ruts in the road that had taken down the guy on the way north, but somehow we never came across them. I’m still not sure how that is possible, we were heading back down the same road we went out on, but we never could find it. We rode into town, down mechanics street and into the finish area. The band was just finishing up, and starting to tear things down, so we headed to our car to ditch the bikes and some of our gear before we header over to trade my balloons/token in, and get some food. We ended up at the prize table and I was told I needed my number off my bike to claim my prize, but I was told that my prize was GOLDEN TICKET!

What does golden ticket get you? Why, it gets you a bypass of the Lottery for the Dirty Kanza 2020! I was stoked to say the least. I wanted to quickly get back to get my number to make sure I didn’t miss out on this! I rushed back to the car and back to the prize table to get my ticket. The lady tried to take my backpack from me, at which point I told her that wasn’t the token, the backpack was mine, so she let me keep the balloons (minus the one she popped). 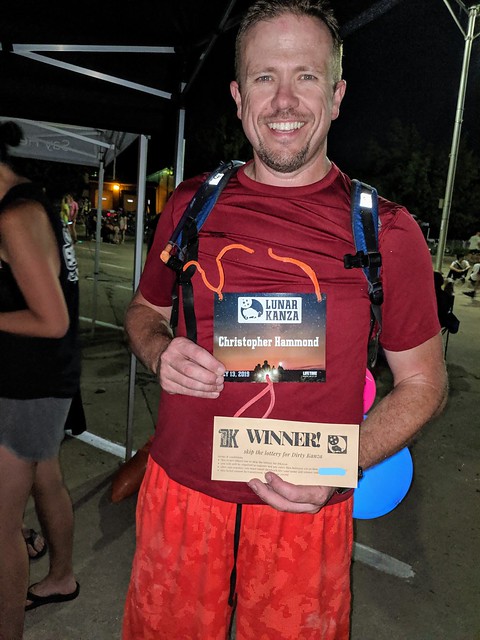 From there Wagner and I grabbed some food, and a drink. We sat down to eat and my balloons started popping on the ground. We didn’t stick around too long, with the band having torn down, we ate and decided we would simply get back to the hotel and get some sleep so we could drive home at a decent hour the next day.

The ride back to St. Louis was uneventful, except for stopping in Columbia, Missouri, where Wagner introduced me to Shakespeare’s Pizza. It was excellent, and I even stopped there a week later with my kids when we went through Columbia to visit family on the other side of Missouri.

If you haven’t done the Dirty Kanza, or even if you have, be sure to check out Lunar Kanza assuming they do it again next year. I’ll be out there if I can, July 20th, 2020!